I started running on a consistent basis when I was a freshman in high school, so over twenty-one years ago. For twenty of the last twenty-one years of my running career, I didn’t keep track of anything more than the time I spent running. Even then I only kept track for the duration I was running.  I never officially logged anything. For many years, I simply hit the timer on my watch and ran for a set amount of time. I often found myself arriving home short of my time goal and I would run up and down the block until I was at an even number. Then I would walk inside and clear my watch and start again the next day.

As I became more familiar with my running routes I found it very liberating to sometimes run without my watch. I would wear my watch and check the clock time when I left and then I would just run my predetermined route and only check the clock time when I arrived home. Since I wasn’t directly timing my run I would stop when I arrived back home. There was no need to run up and down the block to get an even time. Sometimes it was just nice to be free of the watch and enjoy a run with no feedback. People would ask me how much I run and I would look at them silly. First of all, I told them I was a purest and had no idea.  I just ran whatever I felt like doing. I usually ran three days a week. I would do a shorter run with friends at work, a track workout on Wednesdays, and a long run on the weekends. If I had to put a number to it I would say I ran twenty to maybe thirty miles a week. But I also had weeks where I didn’t run at all and it never bothered me as long as I got in some kind of workout each day.

When I started my job at Lift Fitness over four years ago, they gave me a Fitbit. My first Fitbit just tracked my steps. I quickly became addicted to step counting. If I wasn’t at my 10k steps for the day you would find me walking circles around the main floor of my house at all hours of the evening to make sure I got there. When I was home on maternity leave with Taylyn I upped my step goal to 12k steps a day and that is where its stayed for the last three years (almost three, Taylyn won’t be three for another week and I keep reminding people she’s still two. I don’t want my baby growing up!). 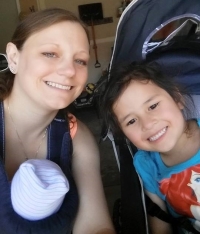 In April of 2017 my Fitbit bit the dust for the third time and I knew it was time to upgrade to something that did more than just track movement and steps. Since I was training for an Ironman I felt I had graduated to the next level in activity tracking. Lucky for me, I had saved up three years’ worth of birthday presents from my parents so I asked them for a Garmin watch. I felt it was time I had a watch with internal GPS that could count my laps while I swam, something a little more Ironman training compatible.

Mid-April last year I started counting my mileage for the first time in my over twenty years of running. So now not only did I care to reach my step goal every day, but I had convinced myself I needed to run at least 100 miles every month. I stopped being a purist. As 2017 progressed I upped my monthly running mileage goals, connected my watch to the bikes here to keep track of my mileage, and of course I kept track of the meters I was swimming. By December I decided to run my first 200 mile month, I think I can confidently say ever, but I will never know for sure. Then in March of 2018 I was twenty-two miles away from another 200 mile month when my Garmin decided in the middle of a swim it had, had enough. People joked I did three years’ worth of workouts in one and it just couldn’t keep up anymore. The day it died was tough, but my natural instinct to everything is do whatever I can to fix the problem. I contacted Garmin as soon as I returned to my room after the swim. They gave me an address to send my dead Garmin to and once they received it they would send a replacement one to my house in the states. I was content with the solution, but now I’m without a watch, step counter, GPS, bike mileage counter, and lap swim counter. Really I was panicked. How was I going to train.

Then I started to think, ok, you went over twenty years with no knowledge of what you were doing and you still finished 16 marathons, multiple triathlons, and so many road races of various lengths you can’t even count. Firstly, I decided to run out the twenty-two miles to get to my 200 mile month. Initially I was just going to skip it. My results weren’t going to show up on my Garmin app so so why do it if I’d have no record of the miles. The truth is those miles still count and I can count to 22, so why not finish. I almost started to believe if I couldn’t see the workout on my watch, then it didn’t happen.

What I’ve discovered over the last few weeks without a watch that tells me everything, is nothing has really changed. I’m a little more relaxed when I run on the treadmill because I am not stressing trying to keep the indoor running mode on my watch in sync with the treadmill. It works rather well, usually within three one hundredths of a mile, but I have to ensure I move my arms a certain way to keep them synced. I have to think more than I would like to keep the treadmill and my watch together and I can’t just zone out and run. I’ve been enjoying zoning out. I’m still writing down my mileage, but on a piece of paper. I’ve taken a step back from the technology, but I don’t think I’ll never be able to be a purist and just time my runs every again! This break from the technology has been a little liberating. For biking my phone still connects to the bikes and is tracking my workouts via the app I use to set up my workouts. I’ve even started strength training again twice a week and I really needed to make that commitment. Since I am not obsessing over how many miles I run I’m taking the time to improve other areas of my fitness I’ve been ignoring.

My replacement Garmin arrived at my house this week and my mom already put it in the mail. I am excited for its arrival and I will be ready to start counting again, but I can’t say I didn’t enjoy a little break from all the information!

Also this last week marked nine years since TJ and I went on our first date. We went out for breakfast at Denny’s in San Diego. I know on April 16th of 2009 we never would have believed that nine years later we would have three amazing kids and he would be home with them while I’m in Afghanistan.  But here we are!  The thing is with TJ I’m never counting. I’m not keeping track. Every time our wedding or dating anniversary comes around I have to do the math to figure out how many years we have been together. It just feels like we’ve always been together, in a really good way. I just simply don’t remember life without him and I really don’t want to. He’s doing an awesome job keeping the house together while I’m gone and getting everyone everywhere while I’m away. He is my partner in life. I will remain a purist when it comes to our time together. If I start counting I will realize there is never enough time for us and our life together. Instead I’m going to enjoy every minute and continue to be thankful for our life! Don’t let me go!